RU
EN
«Zhukovskie Vesti»
«Townspeople want blood»
How Zhukovsky residents put pressure on the city’s sole independent anti-war media outlet
Zhukovsky is a small town in Moscow Oblast, a science city of Russian aviation with 100,000 inhabitants. Zhukovskie vesti has been published here since 1991. The newspaper started as a project of the local administration, but by 2000 the editorial board bought out the newspaper, creating the first and only independent media in the city.

Natalia Znamenskaya is the founder and editor-in-chief of Zhukovskie Vesti, her daughter Ela works there as a contributing editor. In recent months, Ela and other editorial staff have faced pressure due to the openly anti-war stance of Zhukovskie Vesti. The pressure came not from the authorities, but from the paper’s readers.

Part of the townspeople demand that Zhukovskie Vesti be shut down and that Znamenskiyskiys be deported from the country. The complaints led to the blocking of the media’s Instagram account and a federal inspection by Roskomnadzor, Russia’s media regulator. However, Zhukovskie Vesti continues its work, intending to continue defending the editorial board’s position.
«Townspeople want blood»
How Zhukovsky residents put pressure on the city’s sole independent anti-war media outlet
«Zhukovskie Vesti»
Zhukovsky is a small town in Moscow Oblast, a science city of Russian aviation with 100,000 inhabitants. Zhukovskie vesti has been published here since 1991. The newspaper started as a project of the local administration, but by 2000 the editorial board bought out the newspaper, creating the first and only independent media in the city.

Natalia Znamenskaya is the founder and editor-in-chief of Zhukovskie Vesti, her daughter Ela works there as a contributing editor. In recent months, Ela and other editorial staff have faced pressure due to the openly anti-war stance of Zhukovskie Vesti. The pressure came not from the authorities, but from the paper’s readers.

Part of the townspeople demand that Zhukovskie Vesti be shut down and that Znamenskiyskiys be deported from the country. The complaints led to the blocking of the media’s Instagram account and a federal inspection by Roskomnadzor, Russia’s media regulator. However, Zhukovskie Vesti continues its work, intending to continue defending the editorial board’s position. 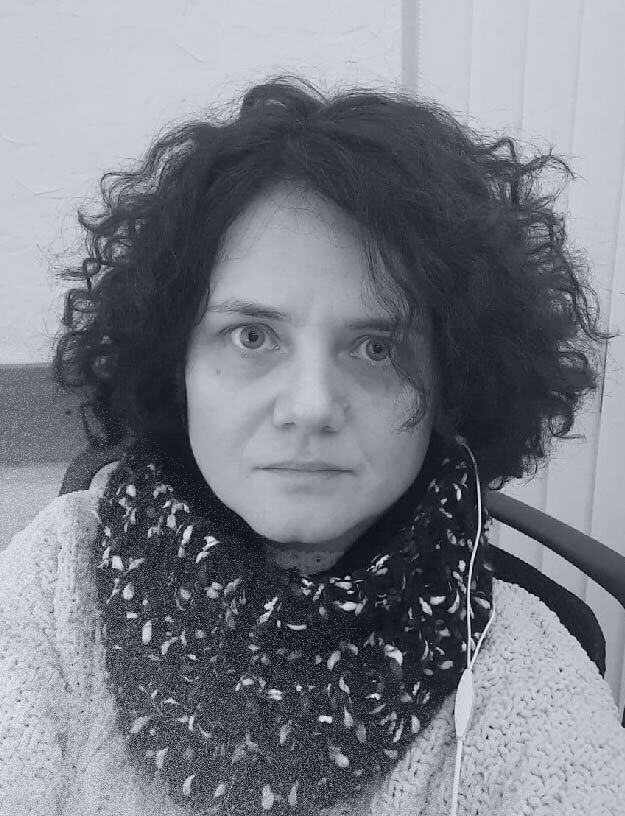 Ela Znamenskaya
Before the war
— Zhukovskie Vesti is a newspaper writing about the city and the sense of dignity. About the fact that you can’t trample on people. For instance, if residents decide to burn their yard, let them do it. If the residents were not asked and their yard was burnt down, it is unacceptable.

During the situation around the Tsagov Forest (protests against clear-cutting the site for the construction of the M-5 Ural Highway in 2012 — note by the project team), we became the platform where the fight [against illegal logging] was concentrated. People thought we were green environmentalists. But in fact, no: I hate the forest and I am sick of those trees because I have to protect them all the time. It is a matter of dignity, which Zhukovsky has always been famous for.

Small towns have their advantages and disadvantages. We were born and raised here, we know all the local officials, the police and the prosecutor’s office since we were kids. So, we get a lot of insider information. And if we lack article topics, it is enough to go out in the street, and during a half an hour walk I will hear 30 fresh gossip stories. At least 15 of them will turn out to be true and something we can build on.

The downside of our situation is that for the past seven years Zhukovskie Vesti has been living under constant stress. We used to be quite well off with revenue from advertising: no less than six out of 32 pages of the print edition were advertising. Moreover, the readers' confidence in our publication extended to the advertisers as well, their services were selling out well.

But in 2015, the economy went into a steep dive, and all the small businesses in our city died. They were our only advertisers, because banks and big companies were not interested in advertising to an audience of 100,000 city dwellers.

We realized that we were screwed and began to fight for the media introducing subscriptions. For six months, we charged 470 rubles: with the delivery cost, it is still less than the cost of production. We have cut all our costs as much as possible. For example, I am now working in the editorial office, while our secretary works at her second part time job and I’m stepping in for her.

In 2018, we announced a donation fundraiser for the newspaper, which is what keeps us going. We lived like this until the 24 February.
Turning point
— The day the war started coincided for us with a personal tragedy. My mother and I were in hospital with my husband who was dying. But we started to do what we had to do: at night I would stream from the hospital and tell what was happening to our relatives in Ukraine, and in the morning, I would come to the editorial office.

There was no question of whether or not to write about the war. We understand that we work to say what we think is right. If we shut up, the years of work before that would be wasted.

We have an audience that does not recognize the special operation in Ukraine and considers it a war. But there are also many city residents, not bots, who believe that we may stand up for their rights for more than 20 years but are not allowed to have an opinion.

Before the fake news law came along, we broke loose and published columns presenting our straightforward opinion on what was going on. The problem with print newspapers is that their audience is older people. But after the 24 February, young people came to us to buy newspapers to put them in the mailboxes of their blocks of flats. People wanted to explain to their neighbors and friends that not everything was going as smooth [as they said on TV].

After these columns came out, we received calls and letters telling us how wrong we were or that we were agents of the State Department. The head of the city received a letter asking him to close down our newspaper (which, by the way, is private) and offer us a job in a public toilet.

Before the media’s Instagram was blocked (due to complaints from users — note by the project team), we received messages suggesting we go to Israel and indicating specific flights.

There was one particularly remarkable case was when a woman came to the United Russia’s (Russian ruling party) reception office to complain about how wrong we were. She didn’t complain about roads being so fucked up, the yards being a mess, or why the city’s main sewage plant is in disrepair and can burst at any moment. No, she came to ask them to deal with us.

The United Russia acted in their usual way: they told her to go to the police. I don’t know if she went there or not, but I keep getting indignant calls at least once a day warning me that the authorities are about to deal with us.

The hardest moment for me was when at the end of March some people came to the editorial office, and I knew them because I had helped them [as a journalist]. They came to say that I was disgracing our science city with my columns. And that, after I had spent a huge amount of time helping them, pestering officials, pushing for solutions to their problems. I thought that these people would feel grateful to us, but they felt obliged to say that we were traitors.

The most interesting thing I realized from talking to them is that as soon as a new problem arises, they will come to us again. All this causes cognitive dissonance. It seems to me that there has been a breakdown in the mental health of the Russian society.
Pressure
— We are used to pressure. Back in 2004, before the elections to the Council of Deputies, where Natalya Znamenskaya was running, a Molotov cocktail was tossed at our flat. In 2010, the deputy head of the city demanded that the city businessmen stop paying for advertising in Zhukovskie Vesti, but they refused and reminded him that he himself owned a business and used to advertise it in our newspaper.

They repeatedly tried to bring criminal cases against us, but without success. The police chased us because we were the organizers of all the [protest] rallies. Sometimes, the prosecutor’s office would get involved, digging into personal data matters, mostly in relation to children.

We covered the story of a teacher who was suddenly accused by the parents of her pupils of unprofessional behavior towards children. Then it turned out that the grounds for the accusation were clearly far-fetched, and the teacher avoided criminal proceedings.

The police and prosecutor’s office are not motivated to put pressure on us now. It is the "active citizens" who have taken the initiative and want blood. The pressure from the authorities and law enforcement agencies is understandable and expected. But from the public, it came as a surprise.

So far not a single criminal case or administrative offence report has been filed against us. The only thing is that we are undergoing a federal Roskomnadzor inspection, launched after a report from an anonymous person who did not like our front-page headline "We are told this is not a war". It began at the end of March, but since then we haven’t heard anything from Roskomnadzor.
Future
— It is impossible to plan for the future, not even for three days. I postponed introducing a subscription for the printed newspaper for a long time because I knew that for many of our readers 470 rubles is a considerable amount. But we still decided to play that roulette and launched a subscription for the next 6 months.

We feel the self-censorship. For example, when I write something in the newspaper, I realize that the staff can be held accountable for that as well. At the same time, I cannot make myself write "special operation", it immediately makes me sick. Of course, I will write that this is a war.

Zhukovskie Vesti continues to produce investigations into the city’s budget and public procurement. This is our favorite topic, and it’s also convenient for readers, as no one reads public procurement documents — but we inform people.

We try to show the tragedy in Ukraine through personal stories. I think it makes no sense giving numbers and arguments to people who are zombified by TV. They can only be triggered by something personal.

My relatives lived in Kiev. The oldest woman in the family was 95 years old. They were taken out of the city by ambulance because she couldn’t walk. In 1941, she was leaving Kiev a few hours before the Germans came. I talked to her, she said it was very similar. But now it’s worse.

I want to tell people about this before they close us down. It’s only a matter of time, isn’t it? Now the feds have been dealt with, they are moving to the regional level. We are lower down, at the local level. They just have not reached us yet.

Everyone in Zhukovsky, who could whack us, won’t take the initiative. But once people file enough claims and an order comes from above, they will immediately do it without any qualms.

We can unleash ourselves in the streams, where we are freer to say whatever we want. What makes us go on are the people who come to us and give the last part of their pension to print a new print run or offer apples from their garden. It may well be the spite too: we want to resist the pressure imposed on all of us.